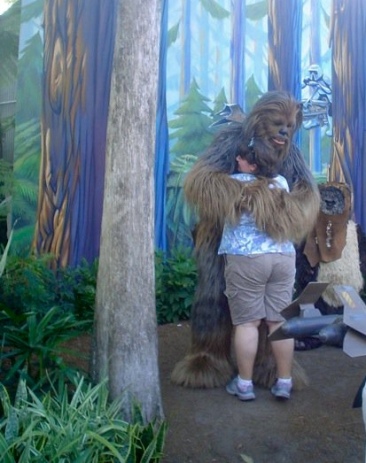 We came into the world in the same year, within weeks of each other. So many of my childhood memories are tied to you. Every Christmas, there were Star Wars action figures under the tree. My little brother and I played in a grove of trees we dubbed the Ewok Forest. And I didn’t give him piggyback rides, but Tauntaun rides. When my dad drove our minivan through a Kentucky snow storm at night, the flakes coming toward the windshield looked to me exactly like the stars whooshing by as Han Solo took the Millennium Falcon to light speed. I never outgrew you, as evidenced by the photo of me hugging Chewbacca (after waiting in a very long line) on my 34th birthday. But it wasn’t until this week, as I watched “The Force Awakens” with my boyfriend’s two sons for the first time, that I started to understand how much I learned from you, how much you shaped who I am. And I just wanted to say thanks. END_OF_DOCUMENT_TOKEN_TO_BE_REPLACED