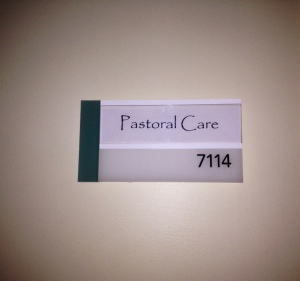 It happens sometimes when I am introduced to someone new, a friend of a friend perhaps.  They ask what I do, and when I tell them, their responses vary widely.  I’ve gotten blank stares when the person has no idea what to say next.  I’ve been thanked and congratulated on my decision to go into ministry.  I’ve heard all the reasons why the other person thinks religion is only for idiots.  And not long ago, when I told someone new that I am a chaplain, she hit me with, “That’s wonderful!  How many have you saved?”

I didn’t know how to answer.  I knew what she was asking.  In evangelical language, her native tongue, she wanted to know how many people I had “led to Christ” through my work as a hospital chaplain.  The short answer is, none.  That isn’t what we do.  In a hospital with any ethical oversight whatsoever, I would lose my job for proselytizing.  To impose my beliefs on people in the throes of a medical crisis, facing great loss and possibly even the end of life, to push them toward some decision that is more about my needs than their own, is manipulative at best.  At worst it is sin.

Does she really think it’s my job to save people?  Isn’t that God’s business?  Besides, how am I supposed to save anyone when I’m still being saved myself, working out my own salvation with fear and trembling, as the apostle Paul so eloquently put it.  I can’t give sick and dying people what they need to be saved.  I believe they already have it.  And I can’t give them answers, but I believe that’s okay too.  When Jesus was asked the way to where he was going — the place all his followers wanted to get to, surely — he didn’t give them a map, or a list of rules, or even a straight answer.  “I am the way,” he said.  He gave them himself.

And that’s what I try to do for my patients.  Pastoral care is all about incarnational ministry for me.  The best I can do is be present to them, to let them know they are not alone, to create space for them to stumble toward God in a way that is true to who they are, not who I am.  Knowing what it is to suffer, to doubt, to question, to wrestle with God has made me a better person and a better chaplain.  I’m still being saved day by day, and it’s often through my patients that God is saving me, not the other way around.

Being around people whose lives have been suddenly turned upside down by illness or injury, or whose lives are coming to an inevitable close, has a way of keeping me honest.  People who are dying will call you on your bullshit; trust me.  It is through them that I am constantly being saved from my own self-involvement, from my evil prejudices and blindness to my own privilege, from my delusions of invincibility and immortality, from self-righteous piety and cheap grace.  It’s often my prayer that my patients would see Christ in me, and it is most often in them that I meet him.  How many have I saved?  Not a one.  Not really.  On a good day, I find myself holding one end of a rope, not knowing whether I’m the one who threw it or the one who caught it.  But I feel someone holding the other end.

One thought on “How Many Have You Saved?”