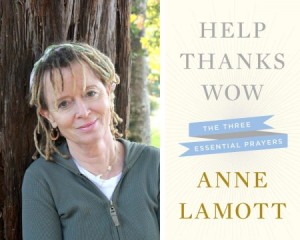 Today I began teaching a Sunday School class on Anne Lamott’s book, Help, Thanks, Wow: The Three Essential Prayers. My pastor, Don Flowers, asked me if I would do a six-week course to go along with a summer sermon series he wanted to do on the psalms. Having liked the book (and heard the author speak about it when it was first released), I agreed without hesitation. Last night I spent some time going over the introduction and Help chapter one more time, making notes and preparing, before I walked my dog and went to bed early. I am housesitting and cat-sitting for some friends of mine, and knew that it would probably take me longer to fall asleep in a bed not my own. But I was exhausted, and drifted off quickly. A couple of hours later, Hurley, my dog, woke me up to let him out to “go potty.” This is unusual for him, especially since he had just gone before bedtime, but I obliged.

If we were at home, I would have just let him out into the fenced backyard alone, but there is no fence here. So I stumbled down the hall in my worn out pajamas, grabbing nothing but my glasses from the nightstand, put Hurley’s leash on him, and took him out the back door into the grassy area between several houses in my friends’ neighborhood. The oppressive heat and humidity hit me as soon as I walked out; I couldn’t believe it was still this miserably hot in the middle of the night. I was anxious for Hurley to do his business so we could go back inside and I could get enough sleep before Sunday School. He obliged pretty quickly and ran back to the door, waiting for me to open it. I tried the handle and found it wouldn’t budge. I tried again, and again, but still nothing. With a sinking feeling, I realized that the door had locked behind us. We were stuck outside, on a hot summer night, in a neighborhood where I knew no one except my out of town friends.

I had no idea what time it was. I didn’t know what to do. I walked around the house testing every door and window, but all were securely locked. My phone was sitting on the nightstand; I could see it through the locked window, for all the good that did me. I was just so tired! All I wanted to do was go back to bed! I suppose I could have started knocking on doors, but being a stranger here and not knowing how late it was, I was scared of someone mistaking me for an intruder. So I sat in a lawn chair and waited, hoping and (yes) praying for someone to pass by.

After maybe 45 minutes, I saw headlights coming down the street. I must have looked quite comical, running after a car in my pajamas, dragging my confused dog with me. The young driver, a college student just coming back to his parents’ house, let me use his cell phone (and then his parents’ bathroom, thank God). I called a local locksmith, but they explained that since it was not my house, they would have to speak with the homeowners before they could come unlock the door. Did I have a contact number for the homeowners? Of course I did – in my cell phone locked in the house! I hardly know any numbers by memory anymore. So I tried AAA, hoping that my membership would allow them to help me. I explained the situation and the operator told me she would contact the locksmith they work with in the area, but that we may run into the same problem of it not being my house. “What’s a good contact number for me to call you back?” she asked. I sighed.

To make a long story shorter, she said she would try to get someone out within the hour, but couldn’t make any promises. I handed the guy his cell phone and let him go to bed, while I sat in the driveway of my friends’ house, waiting. For several hours I sat there, trying to comfort my dog, powerless to do anything to get us back in the house, and I found myself praying – a lot. As Lamott advises to do in the book I would be teaching from in Sunday School a few hours later, I kept things simple. “Help, God,” I prayed. “I don’t know what to do. There’s really nothing I can do. Please send someone or make a way or something. I just need to get us back into the house somehow.” I added, a bit annoyed, “I’m supposed to be teaching Sunday School this morning! It’s the beginning of that new class, and I don’t even have any way to call and tell Don if I’m not going to make it!” I guess I was hoping that this fact would force God’s hand. When I heard an approaching car just then, I was certain it would be the locksmith. But it turned out to be traffic on the nearby main road, which kept right on going.

I kept praying, “Oh, help!” many times over the course of the night. Every time I got a mosquito bite, which was often, or heard a strange noise, or realized again that I was too tired to hold my head up, some form of that prayer sprang unbidden from my soul. And all night long, I didn’t get what I ordered. No locksmith came. No more good samaritans happened by on the street. Hurley and I just sat, and sat, and sat, waiting. I was very hurt that my prayers were going unanswered — especially when I was just about to teach a Sunday School class on prayer! It’s only looking back now and reframing that I can see that my prayers may have had some effect. I wasn’t sent a locksmith during those six hours, but I was given a lot of grace.

Lamott writes in Help, Thanks, Wow, “I’ve seen grace manifest as spiritual WD-40, as water wings, as ribbons of fresh air in tight, scary rooms.” This is what grace looked like for me last night: I didn’t freak out. Never once did I start crying, or get angry at my dog for getting us into this mess, or try busting down the door or breaking a window in my friends’ house. All of those thoughts did occur to me, but by some grace I was able not to act on them. That’s really something. Then at one point, I heard thunder and saw far off lightning and wondered, “What if I’m stuck out here in the rain?” But the night stayed mercifully dry. The temperature cooled down enough to be bearable, and I had the presence of mind to be grateful that this didn’t happen to me in winter.

Yes, I was able to move on, eventually, from “Help” to Lamott’s other essential prayers. I said “Thanks” for the things I mentioned above and others. I was thankful to have Hurley with me, for company and protection from potential attackers. I was thankful to be in a safe neighborhood where potential attackers were not likely. I was thankful that this situation would only be temporary, when for many people living out in the elements is an everyday reality. I was thankful that the only reason I was so tired was because I had just returned yesterday from a wonderful vacation with family and friends in New England. And there were even moments when a spontaneous “Wow” prayer escaped my lips. The dark backyard allowed me to see many, many stars, which never cease to delight me, and I watched the crescent moon make its way from just above the tree line to high in the sky. Later I noticed the faint beginnings of daylight, and watched the sky slowly change color, as birds all around me welcomed the new day with song. All of these became, once I let them, signs of the presence of God. I didn’t feel alone. And I knew that somehow, everything would be okay.

It was. Around 6:30 this morning, a man walked by pushing a baby stroller. I asked if I could use his cell phone, and by this time, I had a plan. First I used his phone to call one of the only numbers I still know from memory — the chaplain’s office at the hospital where I work. Since we have a chaplain in house 24-7, there was a good chance someone would be there. When I got an answer, I asked the on-call chaplain to check our list of pool chaplains and give me the phone number for Don, my pastor, who works as a substitute chaplain from time to time. I reached Don and asked him for the number for Sarah, a mutual friend of the people for whom I am housesitting. I called Sarah and explained what had happened, then got Jen’s number from her, and told her that if she didn’t hear from me in the next hour, I needed her to call Don and tell him I wouldn’t be able to teach Sunday School. Explaining to the very patient man that I had just one more call to make, I dialed Jen’s number, hoping to get her (as the homeowner) to call a locksmith to open the house. I didn’t get her at first, but Sarah kept trying, and within an hour, a locksmith showed up to let Hurley and me in the house. I was incredibly grateful for the luxuries there which I had taken for granted only hours before this.

After a short nap and a good shower, I made it to Sunday School on time (though in my frazzled state, I forgot my book and notes). And we had a great discussion in class. My experiences the night before made for a much better illustration than I would have asked for (though if I’m honest, I would rather have just had a good night’s sleep) and opened the door for our discussion of prayer, especially the first of Lamott’s essential prayers. In his sermon later, my pastor said that “Help” is such an important prayer because we can only pray it when we have acknowledged our helplessness. “Help,” he said, “is admitting that we are not in charge, that we are not all-powerful, that we are in trouble. . . There is a great deal of freedom there. There is a great deal of relief there. Help. We can’t do it ourselves.”

I definitely learned about my own powerlessness last night. And along with the writer of the psalm we read this morning, Psalm 121, I learned where my help comes from — “My help comes from the Lord, Maker of heaven and earth.” It certainly didn’t come in the way or at the time that I would have liked, but I was not left abandoned. God gave me help. And all I can say is, “Thanks. Wow.”

One thought on “More Illustration Than I Wanted”