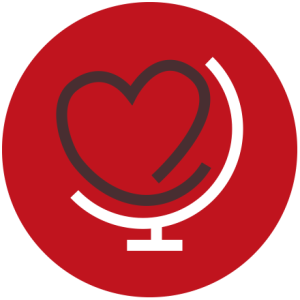 It’s hard to believe, but we’re coming to the end of Advent already. And that brings us to the hardest part of Advent Conspiracy. Man, I thought Spend Less was tough. But here we are at the final theme, Love All. Really, all?? “Love some” I can handle. Even “love most” would probably be doable. But “all,” everybody – surely that’s going too far! Some people just make it so hard to love them. I met one of them a few weeks ago in the parking lot of a Lowe’s home improvement store.

I was loading some concrete blocks and bags of mortar into my car, materials for a garden project I was working on, when this man walking across the parking lot stopped and said, “Excuse me.” I turned, thinking maybe he was going to offer help with the heavy work. Instead he pointed to my bumper sticker — the one that reads “Coexist,” with each letter shaped like the symbol of a different world religion — and asked, “Can you tell me how you expect all those religions to coexist when there’s only one God and one true religion?” From his tone, I knew he wasn’t asking out of sincere curiosity or a desire to engage me in conversation; he wanted to make sure I knew how wrong I was.

“Well,” I told him, “I believe the same God created all the people who believe those different things and loves us all, so I think God expects us to respect and try to understand one another.”

“But did you know Jesus said he’s the only way?” he asked.

I smiled. “I know a lot of things Jesus said, actually. I’m a Christian –“

He cut me off. “Are you sure about that?”

At that point, I went from annoyed to downright angry, and I didn’t even try to bite my tongue when my inner smartass wanted to speak. I responded, “If you had let me finish, I was going to say that I’m a Christian minister. So yeah, I’m pretty damn sure.”

“Wow. What Bible do you read?” he asked.

Turning away from the car to fully engage with him, I answered haughtily, “If you mean which translation do I read, several, in a few different languages. Yes, Jesus said that no one comes to the Father except through him. He came to redeem the world, all of it. I don’t think that means that everyone who comes to God through him knows his name. I think it means he made a way for all of us. Depending on which translation of which gospel you read, Jesus says different things about who he is and why he’s there. But you’ll never find one time he tells anybody they have to become a Christian, I promise.”

He shook his head. “Unbelievable. And you really call yourself a minister? You ought to go home and read 1 Timothy 1:1*.”

“Sure thing,” I shot back sarcastically as he walked away. “And you might want to take a look at Micah 6:8, especially the ‘humbly’ part.”

I hope he didn’t see the sticker on the other side of my bumper, the one that reads “Love Wins.” I sure wasn’t acting like someone who believes that. As a hospital chaplain, I meet people every day who differ from me in lots of ways. Regardless of their religion, race, class, nationality, gender, ethnicity, sexual orientation, political persuasion, etc., I try to love them all. And damned if it isn’t hardest to love the ones I have a lot in common with, probably because they mirror the things I don’t like about myself. My encounter in the Lowe’s parking lot brought to the surface all the arrogance that comes from being in the privileged position I share with this man as white, upper-middle-class, evangelical Christians in the American south. It’s not always easy to love someone like that.

It’s usually not too hard to love the people I meet in the hospital who are nothing like me. I can excuse any offending behavior on the basis of our differences, and I know that I only have to love them for a little while; chances are, I will only see them this one time. And I can love my “enemies,” the ones who live on the other side of the world, known only as a faceless threat I hear about on the nightly news. But my neighbors? They’re too close for comfort. They see me walking my dog in my pajamas and want to have a chat when I’m in too much of a hurry. I hear their arguments on the front stoop even when I don’t want to hear. They trim my crêpe myrtle tree without asking when it gets too close to their fence. Their son drives by late at night blasting his music with the car windows rolled down. How am I supposed to love those people?

Yet that’s the challenge Jesus gave us — to love our neighbors as ourselves. I saw love in action that day in the Lowe’s parking lot. It wasn’t demonstrated by me or my fellow Christian. It was shown by a stranger, who went largely unnoticed as he loaded my building materials into the trunk of my car while I continued to argue with the other man. He didn’t look like us, and I have no idea whether he believed like us. But he was a good neighbor to me, as Jesus taught us to be. He gave me a lesson to ponder in my heart during this season of waiting. It was a gift.

*I can only assume he quoted the wrong reference at me, since that verse doesn’t say anything of any consequence related to what we were talking about; it’s just a typical Pauline letter introduction. Or maybe I heard him wrong.