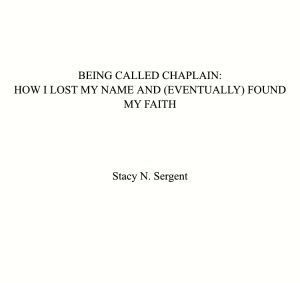 We are just four days away from the ebook publication of Being Called Chaplain: How I Lost My Name and (Eventually) Found My Faith, my very first book! This is a dream come true for me, and a process six years in the making. I still remember the day, just a few months after moving to the Charleston area, that I was walking the Ravenel Bridge with my friend Anita and I told her, “I’ve always wanted to write a book, but I just don’t know what I’d write about!” The next year or so was a case of “be careful what you wish for,” as I got enough material for two books, at least.

I was only a few months into a new job as a (night shift) hospital chaplain, fresh out of CPE residency, and just a little over a year out of divinity school. Though I was thirty-one years old, in many ways I was still trying to figure out who I was. I wondered if chaplaincy was really the right job for me, and if I could survive it. I questioned my beliefs about God as I saw the worst things happening to the nicest people. A pediatric patient who had won my heart over the course of those first few months died, and it felt like the death of hope. Just two weeks later, a dear friend of mine died suddenly, and I was thrown into a theological tailspin. If anyone had told me at that point that “everything happens for a reason” or “God just needed more angels in heaven,” I may have resorted to violence against them. Thankfully, I wrote instead.

As explained in my last post, I have always been someone who journals. This is true even when life is kind of mundane. It is even more true when things are really good or really bad. In the early days of 2009, there was a lot of bad. So I wrote. I wrote about processing my grief. I wrote about being a hospital chaplain, the holy and difficult and even comical stories. I wrote about how my faith felt shattered and I was trying to piece it back together. I wrote because I had to write.

Around the same time, I joined a local writers’ group. And I began sharing with them what I was writing, even though it was sometimes sad or angry, and always brutally honest and more than a little messy. Not only did they not think I was crazy or heretical, but they loved it. They wanted to hear more of it. After a few months of bringing them a few more pages at each of our writers’ group meetings, they convinced me that there was a book in there, a story that other people would relate to and want to read. It took a while, but I started to hope/believe that maybe they were right.

Okay, I thought, if this is going to be a book for anyone to read, I need to change some things. I began right away protecting any patient information that was tied to my stories from the hospital. I changed the names of patients and their families, sometimes also their age, gender, diagnosis, and/or location. A few times I combined two stories into one. I made sure that if any of these people happened to pick up my book one day, they wouldn’t be able to recognize themselves in the story. It was a good exercise for me, forcing me to find what it was about each of these situations that made it important to my story, my faith journey. And once I’d found that one kernel of truth, I could disguise everything else, protecting their anonymity along with the honesty of my narrative.

Knowing that I was writing a book also gave me a better ear for dialogue. If I was having a conversation with a patient, a coworker, a friend, a family member, a person in line at the grocery store, I paid attention to each turn of phrase, every quid pro quo, even the ways body language sometimes communicated as much as the words themselves. I kept a notebook in my purse, and as soon as possible, I would grab a moment of alone time to scribble down these particulars for when I needed them in my book. Sometimes, in the cases of friends or coworkers I knew wouldn’t mind, I even wrote down conversations word for word from memory.

I kept writing, and sharing the chapters with my writers’ group, kept journaling extensively, and working to piece my faith back together. I didn’t know how the story would end when I started. I worried that I might keep writing forever, with no closure to the story, or that I might need to fictionalize more than I wanted, just to come up with a clean ending. But one day, almost exactly a year after I started writing, events converged so beautifully, so perfectly, that I whispered a silent prayer of thanksgiving, and wrote what I knew would be the final chapter of my book. It took me another two years or so to “catch up,” turning the rest of my quickly jotted journal entries and remembered stories into the second half of the book leading up to that wonderful ending. I won’t spoil it for you. But I can’t wait for you to read it soon!

2 thoughts on “Being Called Author”