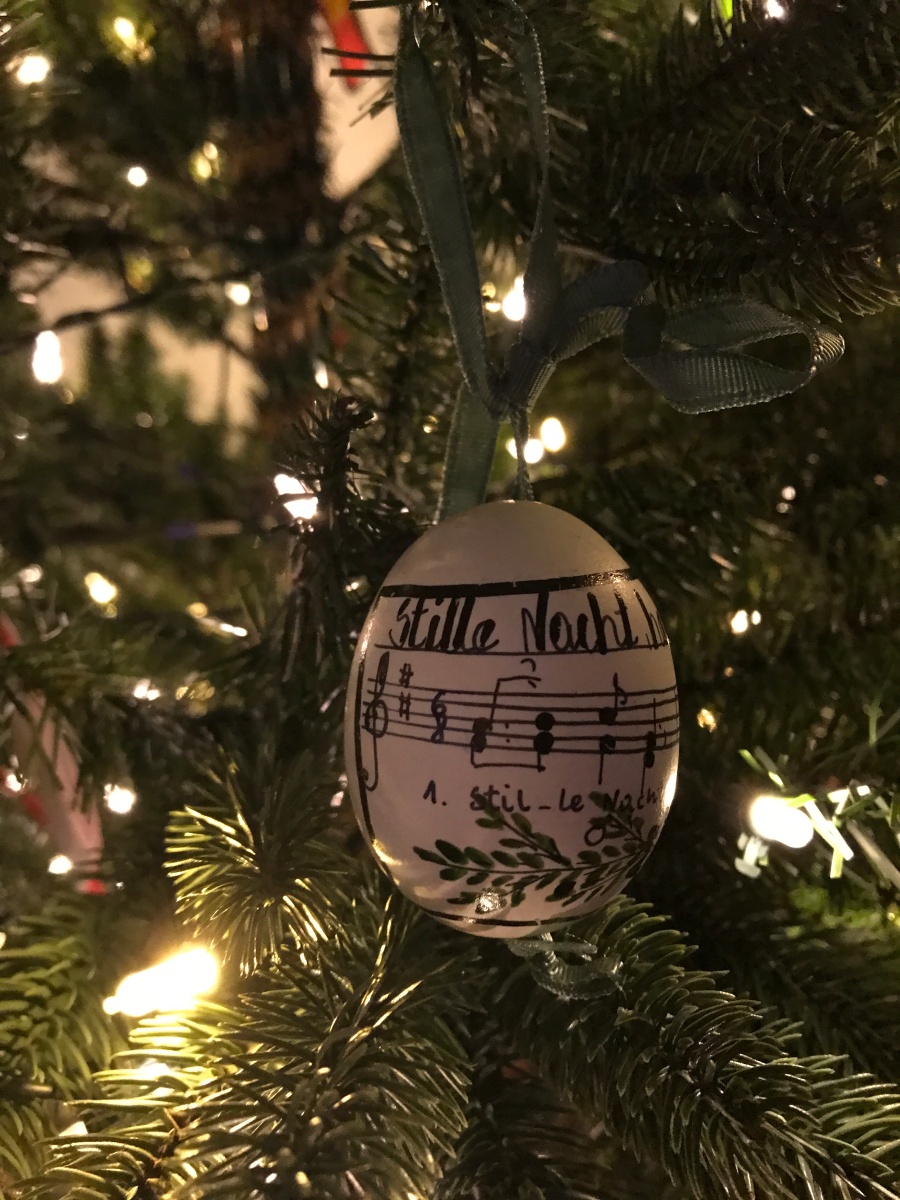 It was two hundred years ago tonight, on Christmas Eve of 1818, that Joseph Mohr’s poem came together with Franz Xaver Gruber’s guitar music and the song “Silent Night” was born. I couldn’t let that anniversary go by without writing about it. We talked about it at church tonight, where my husband played it on guitar for our candlelight communion service. I thought about my visit to Salzburg, Austria years ago, where I saw the house where Joseph Mohr was born, an unassuming old house on an out of the way street. He was born in poverty, to an unwed young woman who worked in textiles. To become a priest, Mohr had to obtain special permission from the pope because of his “illegitimate” birth. I was moved by that story, how someone from such humble beginnings could earn a place in history because of the words he wrote, and when we were in a Christmas shop in Salzburg later the same day, I bought a fragile egg shell ornament painted with the first line of the song in its original German. It has hung on my Christmas tree every year since, in my many different homes across different states and different countries.

“Silent Night” itself has traveled far and wide, too. I read today that it has been translated into over three hundred different languages. Twenty years ago, I caught a beautiful glimpse of the universality of the song. I was finishing up my semester of study abroad in northwestern France, along with hundreds of other students from all over the world in our university’s international program. The Catholic university hosted a Christmas program to close out the term, and we were all invited to participate by sharing some ritual or tradition of Christmas in our home country. (The only one I truly remember is when the girls from Sweden walked in wearing lit candle wreaths on their heads and singing about Santa Lucia.) At the end of the program, one of our professors asked us to join in singing “Silent Night,” each in our own language. There were dozens of countries represented in the room, but we all knew the song by heart. I remember well the beauty of joining in the singing in so many languages, and especially the beauty of the silences between the lines. We were all singing different words, but the silences were where we met. That was when the tears came for me. I think because, in my experience, the silence is where God most often meets us now. In the midst of all the joy and noise and chaos of Christmas, may you also find time for silence, to wonder again at the mystery beyond words that God came to us as a tiny baby on that holy night.