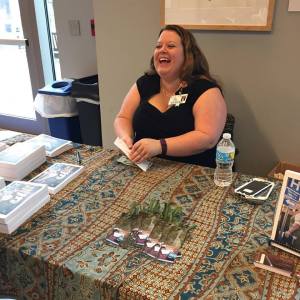 I have a confession to make. This isn’t easy, but I need to say it. Even with all the wonderful things that have been happening in my life this year — and there are a lot of them — I still struggle with feelings of failure. And I know exactly why. As much as I actively fight against it for other people, as much as I give lip service to body positivity, I am still chained to the lie that being overweight means I am not as good as people who are thin. When I look at the picture of me above, the first things I see are my doughy arms and my double chin, and I feel a deep sense of shame. It triggers negative self-talk that tells me I am a failure as a woman because I don’t look like the women on TV or in magazines or in movies; that I am a disappointment to my ultra-athletic family members, who would never allow themselves to be ten pounds overweight, much less nearly a hundred pounds; that I am unworthy of the love of my boyfriend, who surely deserves a woman who matches him in body type as much as I match him in every other way; that I have become the embodiment of all the cruel fat jokes thrown my way by boys from kindergarten to college.

God forgive me for feeding these negative self-talk demons, but I do. “Comparison is the thief of joy,” Theodore Roosevelt said (according to Google), and I shudder to think of how much time I’ve spent over the course of my life comparing my body to other women’s bodies, how much money I’ve spent trying everything to lose weight. There was only one brief time in my adult life that I’ve ever been a “normal” weight for my height. It was partly the result of gritting my teeth and denying myself most of the foods I enjoyed eating, but also of a convergence of things that I will never fully be able to duplicate — a part-time job that was very physically active, free access to an on-campus gym and a 24-hour indoor walking track, a dedicated and motivating exercise partner, a schedule that allowed me hours every day to work out, and the undeniably advantageous metabolism of a twentysomething. I dropped sixty pounds in a year. People treated me differently, especially men. I thought of myself differently. For the first time I could go into a dressing room and come out feeling beautiful. Finding clothes that fit and looked good on me was so easy. When I sat down on someone’s couch, I no longer immediately reached for the nearest pillow that I could hold to hide my protruding belly.

But was I happier? I don’t remember that. I wish I could. This was before I was on Facebook, so I don’t have Timehop supplying me with status updates from that year. My journals go strangely silent during this period as well. And it was before everyone had a camera in their pocket at all times, so I only have a handful of pictures of what I looked like. Now I tell myself that if I could ever get to that weight again, I think I’d be taking selfies every day. What I do remember is that I plateaued five pounds from my goal weight. I could never lose those last five pounds and I reminded myself of that every day, that I still hadn’t quite succeeded, that I still wasn’t “skinny.” My calves were still too big, my face was still too round, my arms were still too flabby. I graded every part of my body and in spite of all I had done, I still marked so many parts “wrong,” “wrong,” “wrong.”

A few weeks ago I was at the heaviest weight of my life, nearly a hundred pounds more than I weighed then. It bothers me more than it should. It isn’t about health concerns, really. I live in fear that others will judge me as harshly as I judge myself, that despite all my successes in life, they will see the physical evidence of my one great failure and nothing else will matter. (This is where I deleted a bunch of defensive bullshit about all the healthy things I’m doing, so you would know I’m trying and wouldn’t think I’m one of those people who deserve to be overweight. Really, you guys, I’m the worst sometimes.) I fight so damn hard not to dwell in the fear. And in the moments when I can let go of it, however briefly, I am happy. When my friends see this picture of me, they tell me, “You look so happy!” No commentary on the flabby arms or the double chin, just the look of sincere joy on my face. And they’re right!

As hard as it is to believe, when I am farther than I’ve ever been from “skinny,” I am also happier than I’ve ever been in my life. I have a job that allows me to live out my calling to walk with people in crisis and bear witness to God’s presence with them, and I actually get paid to do this. I have friends and a church community who bring joy and laughter to my life and who carry me through the times when I can’t remember how to laugh. My childhood dream of being an author has come true and I have a book with my name on the cover, that people are actually buying and enjoying. I have found an antidepressant that keeps the darkness at bay without terrible side effects. I come home every night to a house that is safe and cozy and mine (though the mortgage payments do hurt sometimes), where my dog rushes to greet me with yelps of unbearable happiness. I’m in love with a man who is kind and thoughtful and smart and funny and handsome and I could go on, but it’s enough to say that he’s the man I hardly dared to dream of finding someday, and here he is in the flesh, as crazy about me as I am about him. And along with him I get to love his two little boys and all of his extended family, who are coming to feel like my family already. I mean, #blessed, right?!

I pray that someday I’ll be able to get to the point where I can see the happy in the picture first, instead of all the flaws. It will take a hell of a lot of work. I know I’m not alone in this struggle, so if you are also your own worst enemy, let’s just promise each other right now to stop it. Let’s stop comparing ourselves to other people. They’re probably photoshopped anyway. Let’s stop saying ugly things to ourselves inside our own heads. I wonder how different my life — and my body — would be right now if I had decided a long time ago to tell myself every day that I was worthy of love no matter what my dress size was. I’m guessing I wouldn’t have eaten my feelings so often. But even when we do break down and eat our feelings sometimes, let’s please cut ourselves some slack, because God knows wallowing in the shame of it just makes things worse. Let’s look at our own pictures like we would look at pictures of our friends, seeing the smile instead of all the flaws. Let’s just be happy when we’re happy, not when we’ve lost enough weight to “deserve” happiness. We’re here, alive and loved and loving. For God’s sake (and ours), let’s call that reason enough to be happy.

5 thoughts on “Happiness: It’s Not Just for Skinny People”